We make an award every two years to the best paper(s) published in the journal. There is always about 18 months delay after the publication period to allow time for reflection, citations, etc. The selected papers are selected by vote of the editorial board. The best paper wins an engraved bronze plaque and US$1000. Any other awards are in the form of certificates.

This year, because we had introduced a new award for energy forecasting, we decided to make the winner of that award ineligible for this one. Both awards carry the same prize money and plaque. 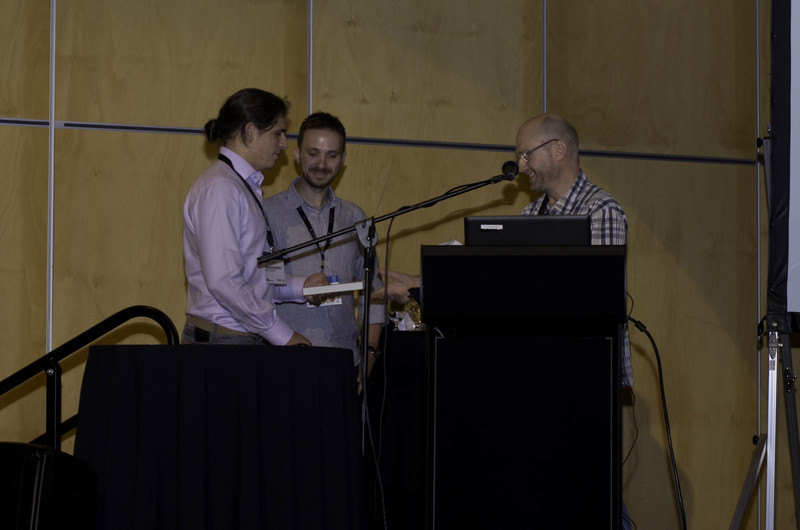 Presenting the award to Nikos Kourentzes and Fotios Petropoulos

The best paper award goes to Nikos Kourentzes, Fotios Petropoulos and Juan Trapero for their 2014 paper on forecasting across multiple frequencies. The nomination of the paper included the following citation.

This paper tackles a very important and difficult forecasting problem, combining forecasts when data are available at different frequencies. It succeeds by finding a forecast procedure robust to model selection and parameterization while being simultaneously simple to implement. As a consequence of this simplicity, the procedure can be important not only for academics but also for practitioners.

Two “outstanding paper” awards were also made. One goes to Andreas Graefe, Scott Armstrong, Randall Jones and Alfred Cuzán for their 2014 paper on combining election forecasts. The following citation explains why the paper was nominated.

While combining has been around in the literature for decades, this paper arguably provides the best experimental comparison of combining with diverse individual methods to date. The individual methods were implemented by people who wanted/expected their method to be the best … thanks to the fierce competition in election forecasting over several decades. The paper is easy to read and clearly explains the methods, findings, and conclusions in a way that is accessible to the general reader and to commentators in the media.

A second outstanding paper award goes to Barbara Rossi and Tatevik Sekhposyan for their 2015 paper on evaluating predictive densities.

This is the first paper to tackle the problem of density forecasts in large dimensions and the methods proposed here can be applied in a variety of different fields. The methods introduced apply much more widely than the particular application of macroeconomics.

Congratulations to all award winners!